The driving simulator follows the path created by the directions and shows the present position in different views. Following views are available: 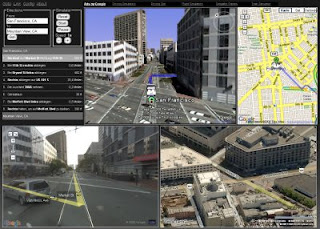 Test drive Gaiagi Driver (Google Earth plugin required; you will be asked to install it if you have not done so).
Posted by Gmaps Gaier at 1:36 PM

Have a look at our app Globeglider.net. We had this running already in 2006 (no offense).

This is definitely going in the right direction;-) !!

We had the first
we know a long time ago
we did already...

And here is a tutorial for Google Maps made in paper :) (just for fun)
Pretty sure you'll like it.
http://www.youtube.com/watch?v=I9TtDecveCE

cool appication.
do you think it would be possible to save streetview images as frames into an anination files? If such images are taken close enugh one to the other, a coll video could be generated!

I am trying to drive this route, but the driver stops at point A and never resumes his drive! Also, the directions on the left side only show the first segment of directions. Is this just a limitation or what?

What I was trying to do is give a real tour with multiple destinations. It's hard to make an interesting route with only one stop! I'd like to be able to stop at multiple points along the route. Google's routing is of course shortest-time or shortest-distance - it's not necessarily the most interesting. So what I'm suggesting is that somehow you enable the code to handle the remaining stops. Ideally, you would have boxes to enter multiple destinations or stops, just as Google Maps does now.
My routing, as you can see at the link, does work. The only issue is that the driver stops at point A and never drives the rest of the route. (This is likely connected to the fact that only the first segment of the entire route is listed at the left side of the screen.)
It seems to me that most of the needed functionality is already there - since it is already capable of showing a multi-stop route in G-Earth and G-Maps. We just need the driver to keep going after point A and have the whole route show up on the left box.
Are you interested in enhancing your site in this way?

PS I can't find your email address anywhere on your blogs, sites, or profile. ;)

Your driving simulator is so cool. You have done wonderful job. It's one of the kind in the world.

Thanks Peter, for the very kind and encouraging comment.

As always - please let us know if you have additional ideas you'd like to see implemented.

Danny, re multi-step destination. This might not apply to many users but we will investigate what the effort to implement this would be.

why is it that every time I start or go to the driving simulator, it asks that the plug in needs to be installed. It already is installed and running in admin mode. Restarted computer and tried all I can think of with no luck. Still keeps advising that it needs the google earth plug in?

Gaiagi no longer works. You should make a new driving simulator, without Google Earth Plugin, since it's closed. You could also include traffic signs, using this little link:
https://www.mapillary.com/app/?lat=20&lng=0&z=1.5&signs=true

Just do it. I liked the old Gaiagi, you should do it.